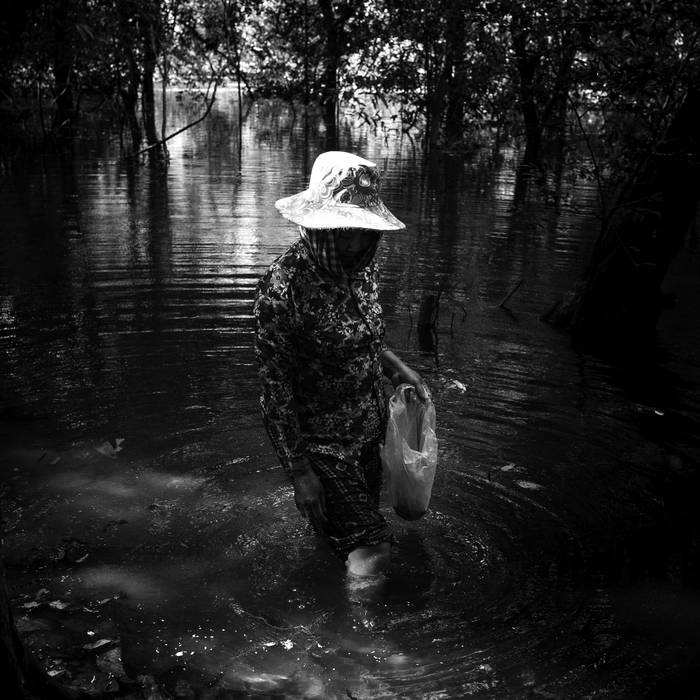 Derichan sees London based Lafidki, aka Saphy Vong, exploring the rituals and traditions of his Cambodian heritage while protesting the repression increasingly prevalent in the country.
Vong was born to Cambodian parents in a Thai refugee camp. He has lived in cities across Europe and Asia, from Paris to Phnom Penh to Riga. These experiences have seeped into his music – a vivid, high energy collision of synths, samples and off-kilter polyrhythms.

A key inspiration for Derichan is the more than 20 ethnic groups residing in Cambodia’s uplands and mountains whose unique cultures, languages and histories are at risk.
“Historically, these peoples have been referred to as ethnic minorities, hill tribes, and other, more dehumanising terms associated with wildness, primitivity, savagery. ‘Derichan’ means bestial,” Vong explains.
“I wanted to give a voice to ethnic minorities, indigenous people, environmental activists who’ve been killed or jailed in Cambodia. I used samples from field recordings of Cambodian tribes, made in 2015 with the help of ethnomusicologist Julien Hairon.”

Alongside these field recordings, the record’s high energy electronics imagine a world where the stories passed down through Cambodia’s history collide with a dystopian future.

“The song Poan Pasda is about the story of the banana tree ghost, but with deforestation, there is no more place for this ghost.”

Ceremony of the Drowned covers similar ground, as Vong explains: “The souls of the drowned become water ghosts, causing shipwrecks and pulling swimmers under by their legs. The Ceremony of the Drowned coaxes the spirits out of the water so that they may find their way to the next life or proceed to the heavenly plane. But drought is touching Cambodia because of dam construction so these ghosts are also homeless now.”

Ghosts from Cambodia’s more recent history are also addressed, The Death of Chut Wutty acting as a tribute to an environmental LAFIDKI (Cambodia)
activist killed in 2015.

Like previous Lafidki releases, Derichan is a record of bombastic, widescreen synthesis. But it weaves itself into a broader narrative
of preserving identity in the face of oppression and homogenisation.
“I want to allow myself to embody the past, present, and future all at once so I created this album that explores sound with traditions
and technologies. Cambodia is growing fast but not everyone is ready, so a parallel world inspired me.” Vong concludes.

More information:
Lafidki is the moniker of London-based artist Saphy Vong. Since 2008 he’s been creating experimental music deeply informed by
his Cambodian heritage. He has toured globally, playing major festivals such as Donau 2018 and VIA Pittsburgh, and released
music on labels such as Orange Milk. He also supported acts like Hype Williams, Amnesia Scanner, Laurel Halo, Tzusing, James
ferraro or James Holden.

In 2017 Vong founded Chinabot, a platform and collective to change the dialogue surrounding Asian music. It has released diverse
music from across the continent, showcasing the vibrant yet overlooked creativity bursting out of the region. The label released
Lafidki’s 2017 album, also called Chinabot.
Bezirk is a tape label run by Tristan Bath (Spool’s Out/Missing Organs) and Daryl Worthington (Beachers)